Causes of Infertility & Everything You Need to Know About It. 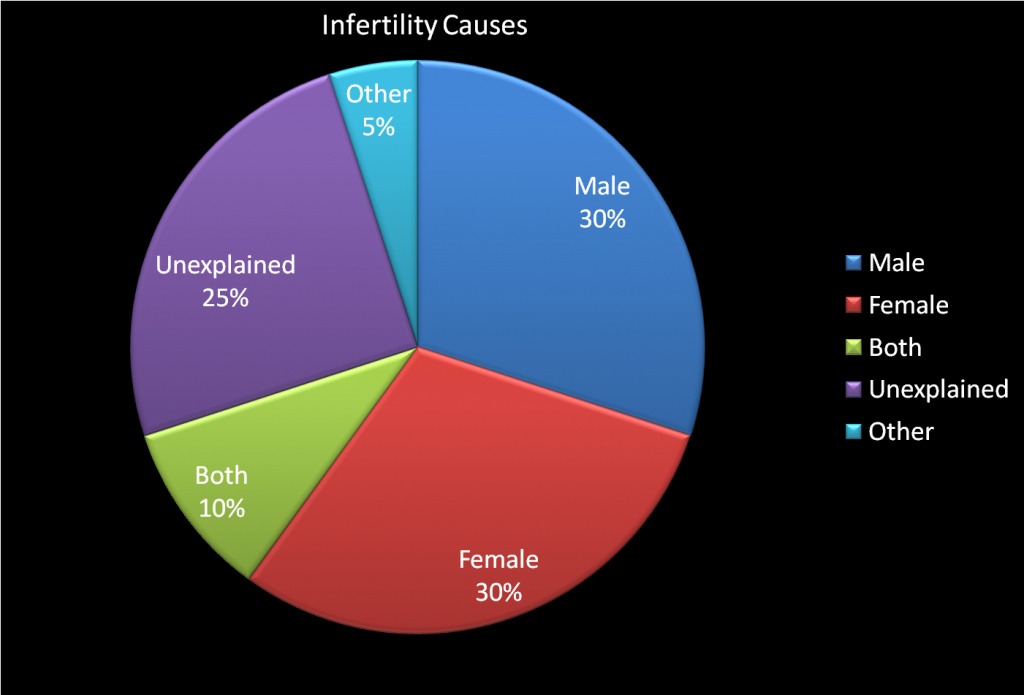 There is no standard definition for Infertility. But most often, if you are under 35 years of age and have not conceived after a regular and contraceptive free intercourse for a year, you are generally considered eligible for treatment by an Infertility Specialist. Over the age of 35, the waiting period is usually six months.

Before you read any further, you should know that Fertility problems are nobody’s fault. It is a medical condition affecting almost one in six couples so you are not alone.

There are many good reads about Infertility and it’s causes across the web so we assume that you have read most of those. Our idea here is to present the data in a format that is easy to understand. We do not to wish overwhelm you with medical terminologies and concepts, sometimes ignorance is a bliss.

Following chart shows the gender bifurcation of the infertility causes. Men and Women equally contribute to the Infertility Causes and for a larger percentage of time the clinical diagnosis of Infertility cannot be made and hence the reasons are termed as ‘Unexplained‘. We know it is frustrating but not everything can be explained.

If we drill down the Infertility causes by gender, then the following chart shows the common causes that slows down conception in women: 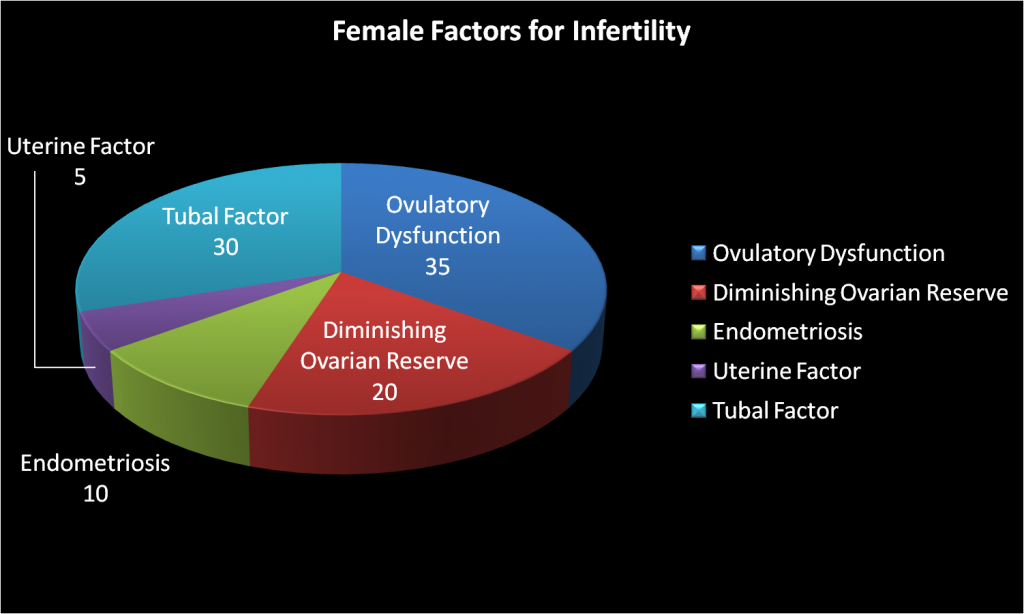 Defined as a combination of menstrual problems (Scanty, infrequent, delayed or at times absence of periods), weight gain, infertility and a rise in the male hormone levels in the body. Also associated with an ultrasound image of ovary with excessive number of small follicles

Statistics related to PCOS
Common disorder affecting about 20 % of the females visiting a fertility clinic.  Incidence on the rise due to lifestyle changes and obesity.

Causes of PCOS
Thought to be both inherited as well as affected by lifestyle.

Stress directly affects your body and your Fertility. Here’s how!

When the cells from the uterine lining start growing  outside the uterus, for example in the peritoneum, fallopian tubes, ovaries, bladder or intestines

Treatment for Endometriosis
Laparoscopic treatment (cauterization) of endometriotic spots
Ovarian Stimulation and Intrauterine Insemination (IUI) : Cost Effective and appropriate first line of treatment as it increases the chances of pregnancy per cycle
IVF may required in severe cases where endometriotic adhesions are dense.

Likelihood of Pregnancy Post Treatment
Very Good Pregnancy rates after treatment.
Early treatment and conception recommended as the disease is progressive in nature. Pregnancy itself is a good cure for the disease and therefore most of the symptoms like painful periods, pelvic pain etc are relieved after pregnancy. What is Primary Ovarian Insufficieny or POI

When the number of eggs in the ovary are reduced. In most cases leads to premature loss of ovarian function (premature ovarian failure at less than 40 years of age).

Accounts for 20% of all cases of female infertility.

With an increase in age the number of eggs decreases. The rate of fall accelerates after the age of 32-33 leading to sterility at a mean age of 41.

Only extreme degree of diminished ovarian reserve is symptomatic. This stage is characterized be peri-menopausal symptoms like hot flushes, night sweats, mood swings, painful intercourse due to vaginal dryness, exhaustion and similar symptoms

Diagnosis of POI or Ovarian Failure

Attain pregnancy as soon as possible, may require ovarian stimulation with IUI to increase chances of conception per cycle. Supplementation  with DHEA therapy is recommended for expected poor responders

Very good till treatment is carried out in a timely manner. Once ovarian reserve is depleted, IVF with oocyte donation gives good results.

How common is poor quality of oocyte or eggs ?

Increasing as age of attainment of pregnancy is on the rise. No exact figures available.

Causes of poor quality of eggs

Diagnosis of poor quality of oocytes or eggs

Treatment for poor quality of eggs

Supplement with Anti oxidants, DHEA. Correct reversible causes like like High Prolactin levels. If uncorrectable cause or If oocyte quality remains poor inspite of treatment, oocyte donation with IVF

Very Good either with own eggs or if own eggs have lost fertilization ability, with donor eggs and IVF

Any disorder in the process of release of egg form the ovary.
Can range from irregular ovulation (Oligo-ovulation) to complete absence of ovulation (An-ovulation)

Accounts for 35% of causes of infertility amongst women

Treatment of ovulation disturbances
Induction of ovulation with medicines or injections after correction of pre-existing abnormality if any.

Statistics related to Tubal Blockage
Accounts for 30 % of all cases of female infertility.

Common Symptoms of Fallopian Tube Blockage
Rarely symptomatic. Mostly presents as inability to conceive.  In some cases can cause lower abdominal pain if associated with pelvic inflammatory disease (PID)

Treatment for Blocked Tubes
Laparoscopic release of adhesions, restoring normal tube-ovary relationship, Opening of fimbrial ends of the fallopian tube and similar endoscopic procedures. In some cases, laparoscopic correction may not be possible due to extent of damage to the tubes. In all such cases, IVF is the treatment of choice.

A variety of disorders ranging from hormonal disturbances to physical problems, to psychological problems can cause male infertility. Although many treatment options are now available, in many cases treatment will not work.

Despite medicine’s limited ability to treat male infertility, many successful treatment options are available today for its many causes. Besides testicular damage, the main causes of male infertility are low sperm production and poor sperm quality.

Male factor infertility refers to the failure of a couple to achieve conception due to problems specifically related to the man’s sperm, seminal fluid, or reproductive organs. A number of things can affect sperm count, ability to move (motility) or ability to fertilize the egg. The most common causes of male infertility include:

1. Abnormal sperm production or function due to various problems, such as undescended or torsion testicles, varicocoele, genetic defects such as Klinefelter’s Syndrome, hormonal disorders (which may also disturb libido and cause impotence) such as hyperprolactinemia, hypothyroidism, congenital adrenal hyperplasia, hypogonadotropic hypopituitarism and panhypopituitarism or infections such as mumps, tuberculosis, brucellosis, gonorrhea, typhoid, influenza, smallpox, and syphilis.

2. Problems with the delivery of sperm due to sexual problems, such as erectile disfunction, premature ejaculation, ejaculatory incompetence or painful intercourse (dyspareunia); health issues, such as retrograde ejaculation; certain genetic diseases, such as cystic fibrosis; or structural problems, such as blockage of the part of the testicle that contains sperm (epididymis). Scarring from tuberculosis or some STDs like gonorrhea and chlamydia may block the epididymis or tubes.

3. General health and lifestyle issues, such as poor nutrition, obesity, stress, or use of alcohol, tobacco and drugs.

Ageing Male. Men older than age 40 may be less fertile than younger men.

Because the end results of the many disparate problems that cause male infertility are low sperm count, abnormal sperm shape, and poor sperm motility, additional tests besides a semen analysis are required to pinpoint the cause of the infertility. For a man to be fertile, the testicles must produce enough healthy sperm, and the sperm must be ejaculated effectively into the woman’s vagina. Tests for male infertility attempt to determine whether any of these processes are impaired.

2. Hormone testing. A blood test to determine the level of testosterone and other male hormones is common.

3. Doppler evaluation of the testis and Transrectal Ultrasound. Doppler/Ultrasound can help your doctor look for evidence of conditions such as retrograde ejaculation and ejaculatory duct obstruction.

Treatment of infertility involves comprehensive evaluation of both male and female to find an ideal solution to the couple’s problem.

Addressing impotence or premature ejaculation can improve fertility. Treatment for these problems often is primarily with medication or behavioural approaches, though mechanical and surgical treatment is sometimes effective. Artificial insemination with an ejaculate (like in Intra Uterine Insemination-IUI )  can be used to overcome infertility.

Treatment of male infertility depends on the cause, how long you’ve been infertile, your age and your partner’s age, and many personal preferences. Some causes of male infertility can’t be corrected. However, a woman can still become pregnant with assisted reproductive technology or other procedures to restore fertility.

Cases of known Cryptozoospermia and Necrozoospermia are also treated with medicine and/or surgical intervention.

Treatment for No Sperm Count or Azoospermia

Donor Insemination - When is it recommended?

Therapeutic donor insemination (TDI) or Donor Sperm can be considered for many causes of male infertility as mentioned below: