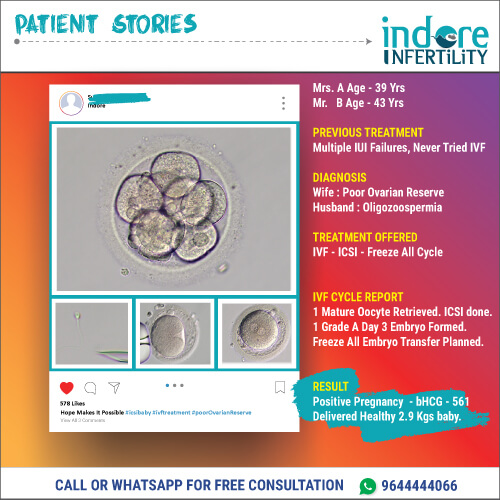 35 Year old Female, lets call her Mrs A, 36 Year old Male obviously Mr. B . They had previously tried 2 IUI Cycles and one IVF Cycle with a Day 3 Embryo Transfer almost 5 years back and gave up on the treatment thinking that if it has to happen, it will happen.

However after 5 years of waiting they seriously pondered over the situation and thought it is best to consult another IVF Specialist and get serious treatment until they have a result.

Assessment of Ovarian Reserve on Mrs. A showed declining ovarian reserve with very low AMH of 0.54 . Husband had normal semen report. The couple was counseled about their treatment choices with details about the expected success rate for IUI as well as IVF. Finally after a of of deliberation, they decided to go for an IVF Cycle.

Thankfully both oocytes fertilized and the embryos were cultured till Day 5. One of the oocytes formed a beautiful Blastocyst and it was cryopreserved for FET. An FET Cycle was planned and Embryo Transfer went on smoothly. Patient conceived with bHCG value of 435. She is currently in her second trimester.

Mrs. A surely is one lucky patient. 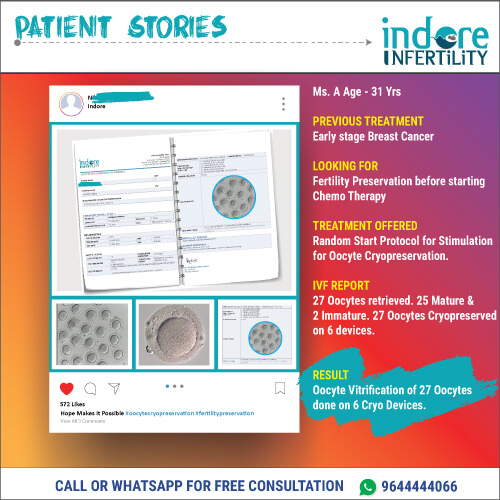 Inspiring Patient Stories, that helps one choose  hope over despair. Patients often need to hear these to know that they are not alone, and there are many who have a much more difficult situation.

It is not everyday that a young female who seemingly looks normal and healthy walks in alone to a fertility clinic. That day, 𝐌𝐬. 𝐀 walked in wishing to consult our Reproductive Medicine Specialist for Fertility Preservation.

Ms. A was diagnosed with Breast Cancer, thankfully caught on time, and was due to undergo chemotherapy  as soon as possible. Also thankfully Ms. A and her oncologist were aware of the possibility of  Fertility Preservation before starting chemo therapy.

She was started on random start IVF Stimulation protocol and an ovum pickup was scheduled. We were able to harvest 27 oocytes, 25 of them mature. All her oocytes were vitrified for future use.

We are sure that she will be able to use her oocytes whenever she wishes to conceive.

𝗙𝗲𝗿𝘁𝗶𝗹𝗶𝘁𝘆 𝗣𝗿𝗲𝘀𝗲𝗿𝘃𝗮𝘁𝗶𝗼𝗻 is a byproduct of IVF. It has helped millions of women worldwide to preserve their Fertility by cryopreserving their oocytes or embryos while they are still young and use them in future when they wish parenthood. 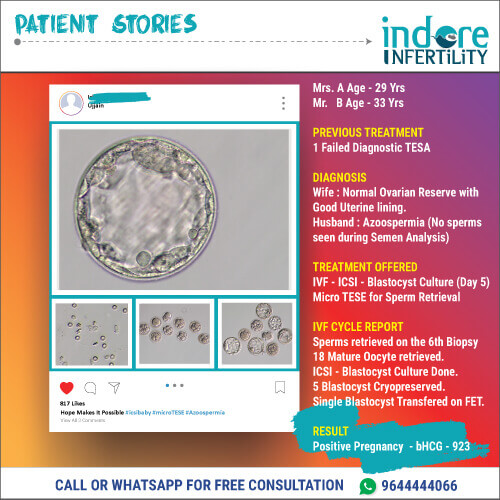 He was very tall, almost 6 feet 3 inches and displayed all the classical characteristics of Klinefelter Syndrome ( A genetic disorder that affects approximately 1 in 650 newborn boys) . With a previously diagnosed azoospermia and one failed TESA later, he arrived at our clinic and just said that he wishes to try again! And asked what we could do differently.

Since he was young and had borderline FSH, we advised him to undergo Micro TESE, because, if there are sperms, the chances of finding sperms in Micro TESE is much higher than regular TESA. The patient wasn’t very affording, but they were very clear that they wanted to give the procedure one more shot.

His wife had normal ovarian reserve for her age, she underwent ovarian stimulation for IVF. And Ovum Pickup and Micro TESE were planned on one morning for both.

ICSI with Micro TESE are one of the busiest days for any embryologist. So was that day! At times if we get lucky, we are able to find sperm in the first few biopsy sites within half an hour, but that day, we found sperms on the eighth biopsy site, almost 50 minutes into the procedure. One hurdle crossed!

Ovum pickup followed and we harvested a good 18 mature oocytes, ICSI was done at an optimal time interval and embryos cultured till Day 5. Five good blastocysts were cryopreserved for later transfer.

After about a month and a half, Frozen Embryo Transfer was planned. One single good grade Blastocyst was transferred to the patient.

She got a positive bHCG with a value of 923 and currently is in her third trimester.

Such patients are rare to find, who despite previous failure decide to give it one more shot without thinking about the possible success / failure rates. They deserve every bit of happiness as they are the ones who bring hope to so many patients out there who are too afraid to try! 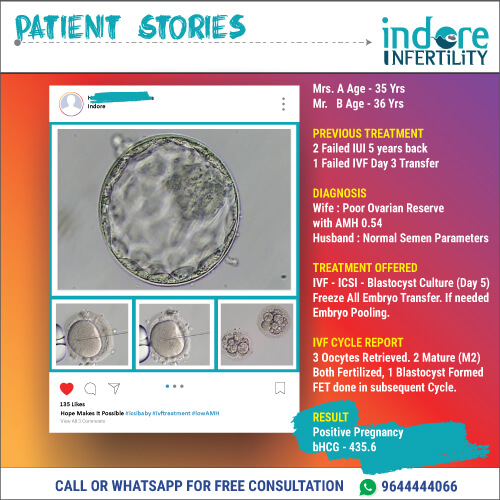 Our next patient is a regular working woman who just couldn’t find time to undergo serious fertility treatment . Wife 39 years old IT Professionals and husband 43 years old, they used Covid Lockdown to their benefit and finally decided to approach a Fertility Specialist .

Both patients had absolutely normal health and the basic fertility workup revealed an expected poor ovarian reserve and husband with borderline Oligozoospermia . With an AMH of just 0.3 and an AFC of 1, the patient was explained their chances of IVF Success and prepared for a possible IVF Failure

Now the ball was in our Embryologist’s court. After optimal incubation of the oocyte, ICSI was performed with utmost care. The oocyte fertilized and produced a beautiful Day 3 Embryo showing signs of compaction. It was vitrified and eventually the patient was transferred one good Day 3 Embryo during her next cycle. The protocol chosen was Freeze All IVF Protocol.

After 14 days of wait, the bHCG test confirmed a positive pregnancy. Nine months went by with no major complaints and finally she delivered a healthy baby in July 2021.

IVF is not a one shot miracle for most, but for those who are persistent, it does help them realize their dream of parenthood, sooner or later! This case was typical, still remember the couple very clearly, young and stressed! Came to us with one failed IVF cycle. It was a typical case of Unexplained Infertility , none of their reports suggested anything abnormal. Usually such cases are easy to treat so we took the normal routine IVF cycle preparation and had fair confidence that we will be able to deliver result soon. BUT we were taken by surprise on day of Ovum Pickup.

To our surprise, all the oocytes showcased a rare Genetic Mutation, this results in an oocyte with missing Perivitelline Space (PVS) and Fragile Zona. In layman’s language, such oocytes, even if they fertilize, will not result in a pregnancy. We cultured the fertilized oocytes till #blastocyst, and as expected, they failed to blastulate to a grade that was good enough for pregnancy.

The couple was counseled about the Genetic Disorder and explained about the option of gamete replacement, they gave consent for Donor Oocytes and their IVF with donor oocyte cycle was eventually planned. The couple conceived in their first Embryo Transfer attempt.

Every patient teaches you something. The day we told them about the genetic disorder, the husband had only one question….. “𝘄𝗵𝘆 𝗱𝗶𝗱𝗻’𝘁 𝘁𝗵𝗲 𝗽𝗿𝗲𝘃𝗶𝗼𝘂𝘀 𝗱𝗼𝗰𝘁𝗼𝗿 𝘁𝗲𝗹𝗹 𝘁𝗵𝗶𝘀 𝘁𝗼 𝗺𝗲 𝗯𝗲𝗳𝗼𝗿𝗲 ?” this could have saved them from another failed attempt!

IVF Failures are difficult to deal with. As a clinic, it is our duty to break the bad news and let the couple know about the findings in the IVF Lab very honestly. And as a patient it is our duty to take the failure with a pinch of salt and move ahead and above all, be realistic about our expectations! 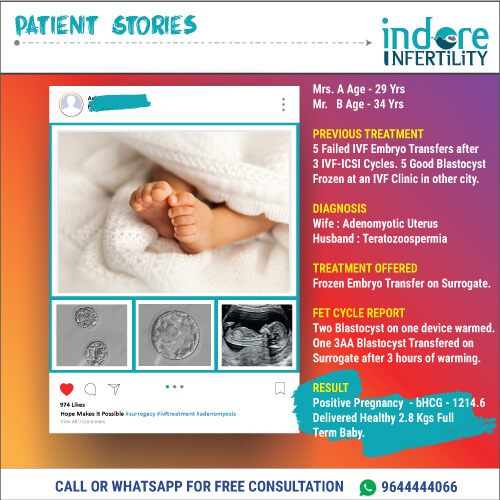 Saved the best for the last!!This one will stay in our memories for a long long time!

Amidst the Covid Lockdown#1 got a call from a patient from Hyderabad, she explained that she has underwent 3 IVF Cyles, 5 failed Embryo Transfers and has about 4 Embryos frozen at a local centre, she wanted to know if we could help her.

We discussed her case over phone at length and the couple decided to undergo Surrogacy with us. We patiently waited for things to open up. Soon by end of September 2020 Lockdown was lifted and cross state travel was allowed. We immediately made special arrangements to bring the Frozen Embryo Straws in a dry shipper to Indore. After 61 hrs of travel time, the embryos safely arrived at our clinic.

Meanwhile, preparations were made to prepare the endometrium of the chosen surrogate at our cliic. An FET cycle was planned on the Surrogate, after completing all the legal formalities with the surrogate mother. It is easier to warm embryo’s that you have frozen yourself at your centre, but this was a straw from some other centre, so we were very very skeptical, To our delight, the embryos warmed perfectly and one of them was transferred to the surrogate. After 14 brutal days of waiting, the results were out. The bHCG test was positive. Moment of joy for everyone around.

The entire pregnancy was followed very closely due to Covid and due to many unknowns of pregnancy during Covid times. Another lockdown followed while the surrogate mother was in her second trimester. Again very anxious times for everyone.

Finally 3 Failed IVF’s, 5 failed ET’s and 1000 kms later…….. A healthy baby was born to the surrogate in May 2021 proving that Failure is not Final and Hope indeed makes it possible!